Presentation
Getting started with terminology extraction
Installing a POS Tagger

TermSuite is a tool for working on domain-specific term. It implements two major features: Terminology extraction and Bilingual alignment. This page gives an overview of their architectures.

Terminology extraction is the process of producing an exhaustive list of domain-specific
terms from a corpus of textual documents dealing with this domain.

As show by the figure above, terminology extraction is a two-step process:

The framework used by TermSuite for its NLP pipeline is UIMA. See TermSuite UIMA Type System to get an idea on how the tokens (UIMA annotations) are modelled within TermSuite.

Transforms a text, i.e. a String, into a list of tokens, i.e. words and punctuations. TermSuite ships its own UIMA tokenizer.

of a term,
The POS Tagger attributes a syntactic label to each token. The Lemmatizer sets the lemma of each word.

POS tagging and lemmatizing are often performed together in the same module. There are two POS taggers/lemmatizers supported by TermSuite:

These bricks need to be installed apart from TermSuite. See how to install POS tagger/lemmatizer in TermSuite.

Normalizing is the process of translating each POS tag into MULTEXT universel tag set.

When TreeTagger is used:

When Mate is used:

Stemming is the process of extracting the stem form of each word. TermSuite ships its own UIMA stemmer, implementing Snowball.

Term spotting is the process of parsing a sequence of words and detecting wich subsequences are term occurrences. TermSuite performs pattern-based multi-word term spotting with the help of UIMA Tokens Regex engine and a list of regex rules on UIMA annotations. UIMA Tokens Regex is a generic regex rule system for sequential UIMA annotations. It has been designed and implemented especially with the goels of TermSuite in mind.

Multi-word term detection in TermSuite is rule-based, based on syntactic term patterns. Each supported language has its own exhaustive list of allowed term patterns. Read UIMA Tokens Regex documentation and TermSuite demo paper at ACL for more information about this process.

Once the preprocessor has operated on all documents of the corpus, all their spotted term occurrences must be grouped into one single place: the terminology. This step is called Importation.

The importation consists in iterating on all spotted term occurrences of all documents. Two different occurrences are said to belong to the same term if they share the same grouping key. The grouping key is defined as the concatenation of the syntactic pattern of the and its word lemmas. For example:

With command line API, this importation phase between preprocessing and terminology extraction is operated automatically either:

With Java API, the importation phase can also be performed manually.

The terminology extraction consists in taking as input an imported terminology an applying the folowing pipeline:

This global extraction pipeline is implemented in class TerminologyExtractorEngine.

The Contextualizer produces a context vector for each single-word term. It requires no linguistic resource. Term occurrences of each term are required for contextualization.

The Term Gatherer is in charge of grouping terms with their variants. It is based on a list of variation rules. The term gatherer is also an aggregated engine. It is composed of several subengines.

The post-processor filters terms and variations based on information derived from the gathering process. It works with no linguistic resources. It is also an aggregated engine, composed of the following subengines. 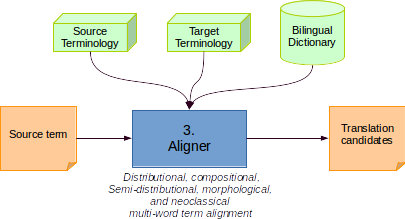 Bilingual alignement of source term in TermSuite is the result of a multi-part and hierarchical algorithm. The source term can be of several types: single-word term, multi-word term, compound term, neoclassical term, etc. Depending on this type, the alignment method invoked by TermSuite is not the same.